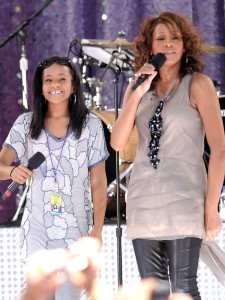 The daughter of late singer and entertainer Whitney Houston was found unresponsive, face down in a bathtub Saturday and taken to a hospital in the north Atlanta suburbs, police said.

In an eerie co-incidence, her mother was found dead almost three years ago when she accidentally drowned in a bath tub at the Beverly Hills Hilton Hotel – she too was face down.

Her father Bobby Brown is currently by her side along with family friend Tyler Perry.

Bobbi Kristina Brown was found by her husband, Nick Gordon, and a friend. The friend called 911 while her husband performed CPR on Brown because they did not believe she was breathing nor had a pulse, said Officer Lisa Holland, a spokeswoman for the Roswell Police Department.

When police arrived, they gave Brown additional care until she was taken alive to North Fulton Hospital.

A hospital spokeswoman did not return repeated messages seeking comment on Brown’s condition.

It is as yet unclear what caused her collapse and a police search of the home turned up no drugs.

‘Obviously we all know her mom died this very same way,’ said Lisa Holland of the Roswell PD.

‘Can’t say how sad this is. It’s a difficult situation for a police officer to perform CPR on any person.’

Detectives were still at the home Saturday afternoon trying to determine what occurred.

Facebook Comments:
What do you think of this post?
Bobbi Kristina, face down in bathtub, found, Whitney Huston's daughter