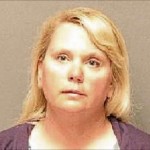 Maryland special education behavioral specialist, Stephanie Mikles, 45, was busted having sex with the family dog over a month-long period in August 2008, reports the NY Daily News.

An unrelated search of her home during an investigation into her activities initiated by the child advocacy center of Harford County turned up pictures and video of them engaged in various sex acts.

Though the Harford County Schools System would not comment on personnel matters, including what prompted the investigation, they confirmed that Mikles did interact with children in her job.

Mikles, who is employed with the Hartford County School District to care for students with special needs, was charged with “unnatural or perverted sexual practice.”

Harford County State’s Attorney Joseph Cassilly said he was uncertain how many times the alleged acts occurred, but because the indictment says it occurred over a period of time, “[that] to me says it’s more than one instance,” reports the Baltimore Sun.

Investigators seized a number of video recordings of the alleged acts that “took a while to go through,” Cassilly said. “As a result of what they found, they placed the charges.”

She was suspended from her position without pay on May 1 and faces 10 years in jail and a $1,000 fine.

The dog is still living with the family.

As previously reported by NewsOne, this behavior is not uncommon.

In March 2012, Bernard Archer, 19, was arrested on two counts of bestiality after he was discovered having sex with his neighbor Dr. Cathryn Lafayette‘s dogs.

Archer was videotaped having sex with a female pit bull by neighbors, who then called the Newton County sheriff’s office.

“Our agreement was if I pay the tuition then he would pay half by working here at my home or whatever I had for him to do. Saturday was his first day to start working,” said Lafayette. “For him to come on my property and rape my female dogs, that’s totally unheard of and that hurt me. I wasn’t here to protect them.”